I didn’t come up the Liffey in a bubble 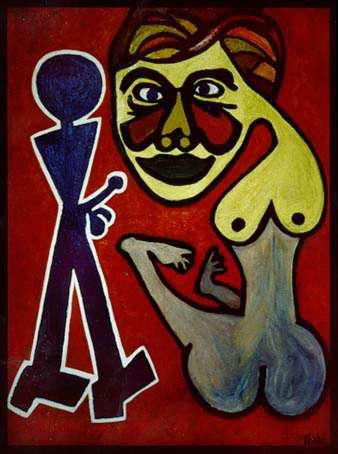 Thus read the invite Gavin wrote for the `Four Artists – Many Wednesdays’ exhibition that took place January 1988. Gavin exhibited a series of paintings entitled: I didn’t come up the Liffey in a bubble. (i.e. I’m not stupid) After ending the Virgin Prunes late ’86, Gavin sought refuge in painting with his mates Derek Guggi Rowan, Charlie Whisker and Bono. Painting, a self-disciplinary occupation, brought him back to finding out who he was after the confusion of ending the band: `like an eight year relationship breaking up’. There was no hassle from record companies or band-members, and the conflict was between him and the canvas, meaning that if he fucked up, he fucked up and no one else. `It was crazy, I made more money out of painting than out of six years with Rough Trade!’. The four would meet Wednesday evenings in Danesmoate, a mansion at the foot of the Dublin mountains, which was later to become Adam Clayton’s residence. They had little in common when it came to painting but found the same things funny and, in Charlie’s words: `We all seemed to enjoy being on two wheels.’ Of course Gavin, Guggi and Charlie were accused of jumping on Bono’s bandwagon, but the truth of the matter was that Charlie Whisker was the one who had the necessary connections with the Hendriks Gallery.

Originally, the plan was to research various characters and situations around Dublin, particularly street characters, religious soap-boxes etc. But in the end the original plan was abandonned and each worked on individual themes, though Gavin seems to have stuck close to the original idea. Gavin on the exhibition:

`That’s me being visually violent, not verbally or musically. It’s all about Dublinisms. I love this city…’

Painting is a different release for him than music. Basically, writing songs comes forth out of the things that hurt or confuse whereas painting is an outlet for the lighter side of life and the things he cannot express in music or lyrics. If the music on Each Man Kills comes accross as dark and brooding, his painting is quite the opposite. There is humour in there, big colourful views of the world and its people, loud, brash and vulgar. A bit like his sense of dress, perhaps. Some deal with Dublin characters such as a woman, `a bit of a religious nut’, a believer in John Paul III who frequents O’Connell Street, preaching the word, claiming that when the end of the world is nigh, Ireland and Poland will be OK. She is the subject of two of the paintings exhibited. In one of them, Sin ‚ an l , Gavin paints her in a bright blue dress, the way a child would draw a woman and adds the words `Sin ‚ an l arth inig an tiarna’, Irish for `This is the day that the Lord will come’.

Gavin is a little colourblind, which makes everything he does come out bright and clashing. This is no handicap; as his painting is more concerned with character and statement, the wildness of the colours helps convey that which he is trying to put accross. The paintings have an impact much like pictograms, simple and naieve in the best sense of the word, with clear-cut images. He mentions Picasso, Heckel and Velasquez as influences and likes to `take the mickey out of machoism’. A visitor of the exhibition was moved to say `Gavin Friday’s paintings seem to dwell a lot on a certain part of the male anatomy.’ One particular painting shows a smallish man both intimidated and excited by the overpowering woman he approaches. Another one was inspired by a close friend who was vibed out one night as they were painting in Danesmoate, imagining `flying mickeys’ much like a flight of ducks. Gavin brings that vision to life on canvas. Yet another pictures himself on stage, with six of his audience. With a healthy mixture of arrogance and self-disrespect he calls it Gavin is God, derived from the Virgin Prunes’ I am God.

This Then Is That

Charlie Whisker was brought up in Northern Ireland. He moved to Dublin and taught at Dublin’s National College of Art, but got frustrated with teaching as he began to see all his own ideas, images and references come back in his students’ work in such a way that he would have to abandon them. He now works as head of computer graphics in Windmill Pictures, his speciality being `paintbox’ on pop-promos. He met Gavin through his friendship with Bono, they found out they had many ideas in common and started working together. He says that most of the works are basically autobiographical, going back over things that he has done in the past, relating to childhood and loss of innocence. He regards himself as a great voyeur of things taboo and on the edge: the extremes of of violence, cruelty and sex, beauty and ugliness. He approaches painting and drawing much like letter-writing, starting out at the top left corner with a small thing and going along in lines towards the right-hand side, adding comments and stories as he goes along. He says he is impatient and therefore does not do a lot of painting as he cannot be bothered to wait for the paint to dry. He prefers pencil and charcoal, which has the immediacy of writing. Rather than turning to other painters for inspiration, he gets more from writers and poets: William Burroughs, Dylan Thomas, Shelley in particular.

Derek Guggi Rowan fronted the Virgin Prunes together with Gavin up until 1984. He was always more interested in the visual side of performing, not in the music. He did artwork for the covers of A New Form Of Beauty. In interviews he has stated that a lot of his paintings are simply what they are and deal with visual impact. The paintings he exhibited at the Hendriks Gallery, such as The First Day, were finely tuned in colour and composition, they had a feel of `airbrush’ abound them. Many were sky scapes: clouds, deserts. His painting The First Day was inspired by the first chapter of the book of Genesis, and deals with the creation of light. He calls what he does now `abstract portraiture’. He started out doing portraits of people that he knew: Gavin, Van Morrisson, The Edge, Shane McGowan. His portrait of Bono was called Man With Half A Mouth, the one of Gavin Man With Square Head and Two Earrings. He went on to do a series of paintings called `The Traveller’s Series’. He had a second exhibition at Dublin’s Kerlin Gallery in March 1990 and a two-man show with Sibylle Ungers at Schur Gallery, Cologne in july 1990.

A String Of Pearls

Bono chose to exhibit twenty-five of the photographs that he had taken in Ajibar, which is in Wello, a northern province of Ethiopia where he and his wife Ali had worked in a refugee camp in September 1985. He knew the photos were good and they needed to be seen, because they gave a different perspective on the trauma of the country and showed a sense of dignity and hope in the people. The photographs, the negatives of which were destroyed, cost 1,000 pounds each and all the money, including the sales of a book on the exhibition called A String Of Pearls went straight back into Ethiopia through Concern/World Vision, the relief organisation that had organised the visit. It was Bono’s way of giving something back to the country he felt he had got so much out of. Bono: `At first, as we walked through the camp, we kept our eyes down and were so overpowered by the suffering we saw around us that I couldn’t even take my camera out of its case. Weeks later, a different but more lasting impression set in of the beauty and strength of spirit of the Ethiopian people. It was then that I started taking photographs, not to deny the waste of human life that was and still is Ethiopia, but to make the people and therefore the tragedy real by bringing their sense of dignity back into the picture. In the end we received more from the Ethiopian people than we could ever give.’

Gavin is careful not to mix painting and music too much: `I’m always suspicious of people who are in music and they think they are actors, painters, writers etc. I went away from the whole music thing and painted for a year and a half, it was very productive for me, I found it very self-disciplinary, and I did an exhibition and things like that, but it was after the exhibition that I wanted to get involved in music again, and I don’t think the two go hand in hand. If you want to paint, I think you should just paint — go away and paint. If you wanna write or make music, you should just do one thing. But it’s still a big love of my life. I’m sure, one day when I knock this on the head or whatever I do — I don’t know, I’ll paint for a long time. But I don’t believe in these characters that can do everything. You know what I mean? It sort of takes away from art if ya go: “Yeah, I’m… multifacet vibe.” I don’t like that.’

The exhibition was successful enough to be prolonged well into February of 1988, after which Gavin got `itchy feet’, his `ego needing and audience’ and he was ready to get back into music. He realized that what he liked best was writing, performing and singing, but he was not ready for the hassle of dealing with a band, so he started a cabaret in Dublin called the Blue Jaysus, which was sort of a vaudevillian experience.