Tomorrow, tomorrow, I love ya, tomorrow! 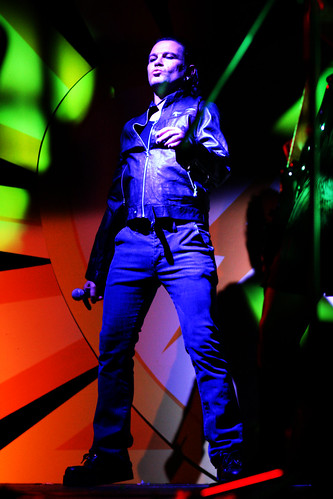 If I Didn’t Come Up The Liffey In a Bubble (Gavin’s spoken word and autobiographical production at the 2003 Dublin Fringe Festival) was his ‘A Life Story of My Life’ show then ‘Tomorrow Belongs to Me’ certainly would seem to come from the same prized scrapbook, but marked more specifically under ‘My German Influences’. Despite the pre show press promotion little was actually given away as to what to expect from this two night residency at The Liberty Hall theatre.

Gavin’s German obsessions have to these ears always sat loosely alongside his Dublin ones. They have been readily referenced in everything from ‘Next’ in the live show context or on record with Shag Tobacco’s ‘Dolls’ . He has quoted German like most high brow English authors show off their Latin. It is a love of the language and place that characterises a certain European otherworldness in Gavin’s work. In the pastwe’ve had but only the briefest of glimpses of what lies within but with these shows we were promised a deep submersion in this very personal book of Gavin’s-Brilliant-German-Things.

The audience are still settling into their seats when the lights dim and the red heart that has been beating consistently on the video screens looks like it might be about to explode. An intro of Bowie ‘s Warsawa paves the way for the serene figure of a red dress-ed, beehive haired, painted faced lady. When she opens her mouth the purest mezzo-soprano voice emerges. Miriam Blennerhassett delivers Bach’s Ave Maria, instantly blowing away any expectations of tonight’s show. Indeed it is the first indicator to the constantly shifting themes of the evening. Movie footage follows on the video screens. In vintage black and white a young curly haired girl bounces a ball against a poster that refers in German to a murder. We see this image clouded by a man’s shadow and later the ball rolling freely into a park. Instantly the tone is set for something ominous, the suggestion of innocence lost.

Gavin strolls on, in trademark shirt, suit bottoms, thick wedged soles and carefully adjusted pony tail of charcoal black hair. He looks as much a Spanish flamenco dancer as a north side boot boy of seventies Dublin , oozing his customary charm and confidence. It’s a presence that cannot be ignored and one that on the second night, is enough to make one male admirer heckle “G’wan Gavin, ya ride!”. Suffice to say Gavin’s retort is appropriately ribald: “Do ya want to see me mickey?”

He wanders the stage, singing a gentle rendition of Randy Newman’s In Germany Before The War , whispering his vocals into the microphone and into every corner of the venue. More audio visual links lead us into Lou Reed’s Berlin . So far the mood is sad and reflective, a sense of a different place at a very difficult time. Gavin drifts into Angel . The mood lightens with recognition. We leave this dark but riveting place.
Falling In Love Again, Lillie Marlene and Each Man Kills The Things He Loves bring us back onto familiar terra firma to the Friday we have known and loved for the last seventeen years, with his penchant for cabaret and vaudeville. But just when we think we have the show sussed he emerges after an Einstuerzende Neubauten musical link to perform Kraftwerk’s The Hall of Mirrors. Fully suited now he sits down and sings the song’s lyrics. Blennerhassett stands behind him, adding a classical backing to this magical duet.

The video footage briefly departs from its collage of blinking, twitching eyes to show Gavin in pre and post ‘star’ mode, wide-eyedly contemplating his alter images. The whole performance is nothing short of hypnotic, like entering sleep and re-emerging from a strange dream.

The stage soon empties for the next part of the show which commences with an electronica beat and a single flashing white light. Clad in a black dress like we’ve never seen her before Cait O’Riordan arrives on stage, her gorgeous bone structure and bass guitar playing as striking as each other. Other band members appear from the shadows and Gavin re-enters the stage walking like a robotic Charlie Chaplin and clicking his tongue to the song breaks of Kraftwerk’s Showroom Dummies . It’s a wonderfully animated performance that ignites from the deadpan original and reminds us that with Mr Friday it is never mere song delivery but theatrical interpretation too.

Can’s I Want More lifts the tempo even more. Gavin gets seriously down dirty with a similarly clad female. She has the sensual frame and moves of a super model. As the title suggests this is pure filthy gorgeous decadence. This light mood makes way for a round of the ‘Spin The Bottle’. Gavin embarrasses audience members with his game of truth or dare. The back rows aren’t spared. On the first night this section of the show takes Gavin all the way up the back stairs to the balcony. On the second night he stays closer to the stage and reaches everyone more effectively by ordering us to hold aloft our limited edition bottles of Beck’s, adorned with the show’s logo. This light hearted play throws the next segment of the show in sharp relief.
After a brief interval Gavin gradually finds his way back to the stage with eerie Nosferatu silhouette play against the backdrop. When he does come back to the stage he is red lipped and white faced, cloaked in a chunky coat with a pointy raised collar. His version of Bauhaus’s Bela Lugosi’s Dead is spectacular not least for its stripped down white noise/white light performance that brings back the hey day of a certain Punk/Goth era but also seems to resurrect the former Virgin Prune. He kneels on the stage stabbing at his heart with the microphone, his hair style and face not aged much in the twenty something years since. Validating that this is not just my reading, the next song after Siouxsie and The Banshee’s Metal Postcard is the incredible Theme For Thought from the Prunes’ … If I Die, I Die . 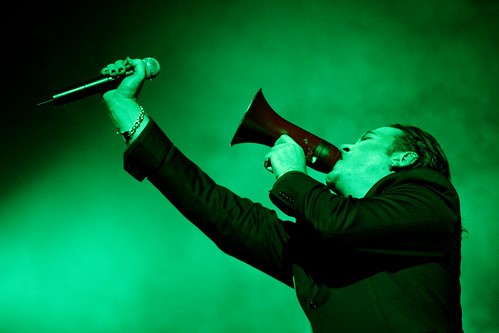 “Should I talk the way you want me to talk/say the words the way you want to hear them/I know a lot of people like that”… I did not think I’d ever see this song performed in such a way in my lifetime. It’s truly a memorable moment to see a performer take the best from their past and, through a megaphone, reinterpret it so immediately in the here and now. It’s the pinnacle of the show for me and an underlining of the fact that Gavin needs a more permanent band and frequent stage presence.

Theme for Thought has lost none of its integrity or vitriol, an anti-fascist poem by Martin Niemöller replacing the original Oscar Wilde verse, reminding us of Nazi horrors and how the path for their blitz of destruction was cleared by the silence of others. This ties into the show’s title song Tomorrow Belongs To Me, best known from the movie Cabaret, segueing into Annie’s Tomorrow. An Irish dancer and tricolour feather boas for all on stage complete the picture.

It could all end here but there’s more…and how! Environmental hazard reminders come courtesy of a version of Kraftwerk’s Radioactivity updated with mentions of Chernobyl and Sellafield. The sombreness is lifted with the release of Nena’s 99 Red Balloons . Stage exit again only for a swirling mirror ball to herald the return of Gavin as we truly have not seen him before! Leather jacket and jeans, with singlet and serious ‘there’s-a-guy-down-the-disco-thinks he’s-John Travolta’ moves this is The Disco Man Friday with his version of Iggy Pop’s Night Clubbing and Boney M’s Daddy Cool . It’s playful and fun, but also a re-education. If any of us ever thought we had Gavin Friday pinpointed, think again!

The show ends to a standing ovation. It feels like the ending of something, the start of something else. A rebirth, a reinvention, a shouting from the rooftops that anything is possible. Of course Gavin Friday shows have never been just ‘gigs’. They are events in all their creativity and attention to production and promotion. A ticket is a golden party invite. All ’round to Gav’s. You never know what to expect. And if this sounds like the hyperbole of the long-time converted I’ll let the newcomer seated behind me have the last word: “He’s brilliant. I’m glad I came. What a fucking performer!”
(text © Patrick Lynch / gavinfriday.com.)