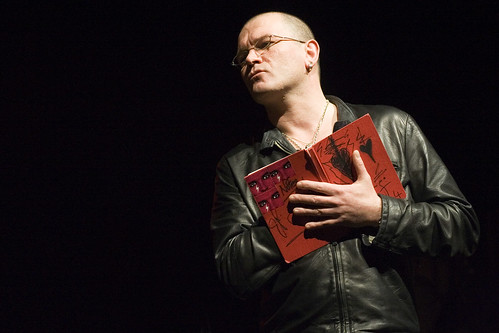 Thirteen sonnets scarcely represent Shakespeare’s 154 poems in a Complete Works season but Nothing Like the Sun is at least a nod in the right direction. Opera North and the Royal Shakespeare Company invited Gavin Bryars to curate an evening of musical settings, the centrepiece of which is his own sequence of eight sonnets for soprano, tenor, speaker and ensemble. The first half is made up of music by five musicians, each preceded by a slightly self-conscious and not always convincing reading of their sonnet. With the intrepid James Holmes as keyboard player/conductor, however, the music hangs together better than the words.

Five diverse musical voices and a lack of narrative focus prevents any sense of flow in the first half, though not without some original expression of Shakespeare’s words. Natalie Merchant makes an evocative stab at Sonnet 73, while Mira Calix adds rustling leaves and other scrunchy natural sounds to the quirky No 130. No one chooses the sonnets allied to political events or the ones that speak about sex (No 20) or introduce an explicit erotic element (No 151), and even Nico Muhly and Antony Hegarty avoid playing with gender roles by plumping for “Weary with toil, I haste me to my bed”, conjuring an image of elusive sleep with wandering cello and tinkling piano.

Alexander Balanescu’sNyman-like textures, almost Bachian at times, wrap themselves seductively around No 43, “When most I wink”, Anna Maria Friman’s ethereal soprano tones circling above the instrumental world like a halo. Cruelly written for tenor, it leaves John Potter sounding a little vulnerable.

The most extraordinary setting, however, is Gavin Friday’s take on No 40, which he intones in a kind of strangulated speech-song. While his words are often inaudible, as a piece of performance theatre it is astonishing. He swerves between Caliban and Puck and several characters in between so compellingly that Bryars’ music pales into an atmospheric blur. Piano and cimbalom evoke the antique sound of the virginals mentioned in No 128, while the nightingale of No 102 sings high on bright clarinet. His last setting, No 64, finally brings all the performers together, but it’s a long time coming.