Rum, sodomy and the lash at The Barbican 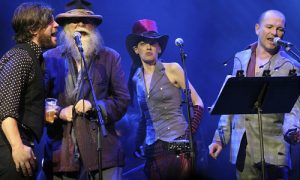 A capacity crowd enjoyed Hal Willner’s epic 4-hour Rogue’s Gallery at the Barbican in London on Monday night. Gavin sang ‘Baltimore Whores’ and ‘Pinery Boy’ and provided backing vocals on ‘Bully in the Alley’, ‘Boney was a Warrior’ and an improvised ‘What Shall We Do With the Drunken Sailor’ together with David Thomas (Pere Ubu), Keith Moline and Shane McGowan. Read on for reviews, video and pictures. 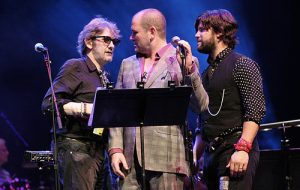 (With Shane McGowan and Ed Harcourt)

“Other fixtures were Ed Harcourt and Gavin Friday. Harcourt’s heartbreaking “Farewell Nancy” sounded less mournful with the Langley Sisters leading the vocals. Friday gave an inspired performance of “Baltimore Whores,” perhaps the first truly exciting performance of the evening. The pair shared vocal duties on “Boney Was A Warrior” with a visibly unsteady Shane McGowan on harmonica and were joined by Baby Gramps in backing Sandy Dillon on “Bully In The Alley,” which was all too perfectly suited to Dillon’s cat-scratch vocals.”

“As Wilner said, you couldn’t get through an evening of sea chanteys without the obligatory rendition of “What Do We Do With A Drunken Sailor.” In the hands of David Thomas, Keith Moline, the still-shaky McGowan, and Gavin Friday, it took on an apocalyptic nature. Despite a light-hearted reference to the accordion on his knee, Thomas succeeded only in making perhaps the best known of sea songs borderline terrifying. However, if a song has been covered to death then it might as well scare you near to death.”

Robin Denselow in the Guardian:

“An extraordinary cast were assembled, and for four hours and 44 songs, they swapped vocals in ever more unlikely combinations, backed by an impressive house band.”

“You’d have to work hard to make a boring evening out of songs such as “Hog Eye Man”, “Baltimore Whores”, “Turkish Revelry”, or “Pinery Boy”. We saw Strange regailing us with the story of the Good Ship Venus, dressed up like a cross between William Burroughs and Tom Wolfe cruising at a Noël Coward tea party. A growling, Beefhearted David Thomas handled the essential “What Shall We Do With the Drunken Sailor” (“is that a rhetorical question?” asked Hannon), taken down to a slow dirge with flashes of abstract, tremolo guitar from Leo Abrahams, and David Coulter’s literally show-stopping way with a saw.”

Can’t please all… Ludovic Hunter-Tilney in the Financial Times hated it, although he was positive about Thomas/Moline/Friday/McGowan’s Drunken Sailor:

“There was the odd gem. The British folk singer Norma Waterson delivered an achingly sad lament about lost love, “Bay of Biscay”. David Thomas of cult art-rockers Pere Ubu turned “What Do We Do With a Drunken Sailor” into a lurching, Captain Beefheart-style squall of noise, complete with a drunken Shane MacGowan blowing a harmonica. Such bright moments merely served to emphasise the lack of illumination elsewhere.”

(What shall we do with the drunken sailor)

And here’s another photographer’s view.