Gavin Friday and Friends at Carnegie Hall – Press Round Up 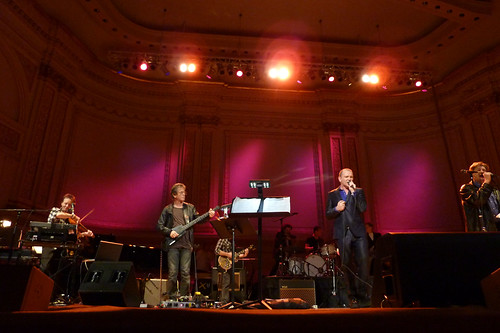 The reviews are pouring in. Here’s what’s being said in the press about ‘Gavin Friday and Friends’ at Carnegie Hall:

“Mr. Friday has built a latter-day career as an eclectic, cabaret-tinged songwriter who hasn’t forgotten rock. The songs testify to romance and disillusion, while taking unexpected harmonic twists. They can be mournful and yearning, but more frequently turn bitterly cynical. They are haunted by death, wounded by love and often disgusted by daily life.” 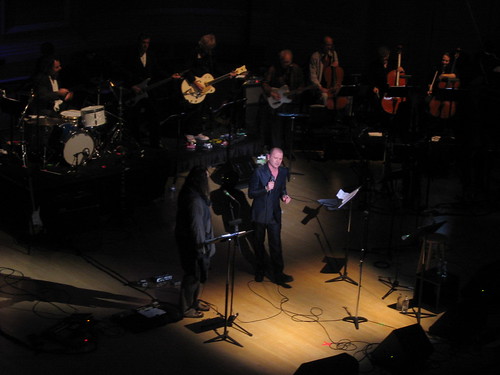 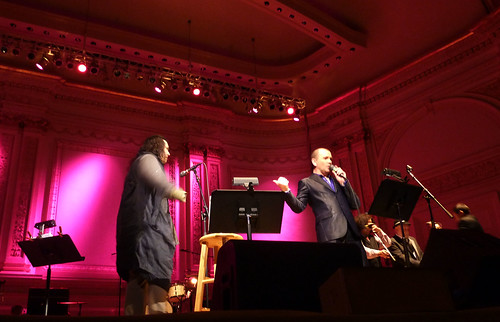 “True to Mr. Friday’s repertory, the concert juxtaposed delicacy and brute force, intimacy and irony. It had tender moments, like Mr. Friday’s opening “Apologia”; duets with Antony Hegarty (of Antony and the Johnsons) on “He Got What He Wanted” and “Angel”; and Mr. Friday’s desolate “You Take Away the Sun,” with the shimmering backup of Bill Frisell on guitar, Hank Roberts on cello and Mr. Seezer on piano.” 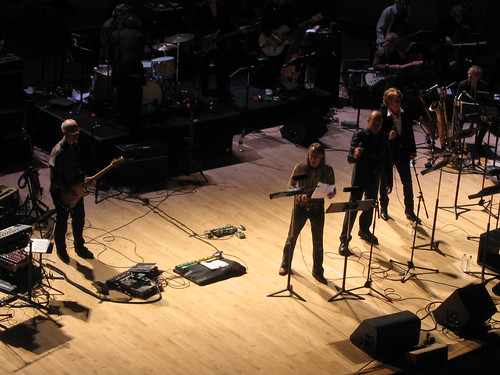 “But the concert’s peak came early, with the reconstituted Virgin Prunes (Dik Evans, Guggi and Gavin Friday), including J. G. Thirwell on additional guitar and vocals, along with Mr. Evans and the singer Guggi from the old band. It bore down on two of its old songs — “Sweet Home Under White Clouds” and “Caucasian Walk” — as insistent, unstoppable drones and imprecations. Even at Carnegie Hall, sung behind music stands by men well past their teens, the menace came through.”

“The silent star of the evening was composer Maurice Seezer, Friday’s longtime songwriting partner. He finally took a bow at the very end. But Friday, who always thought he belonged in Carnegie Hall, sang and acted out his lyrics as if he owned the place, swaggering across the boards, gesturing at the stars and jabbing his forefinger at the front rows with a panache that was part opera star, part Dublin punk. “Do we really need these pop stars?/There’s not enough of me!” he crowed in “Caruso,” a dynamic pairing with singer Eric Mingus. It was a song about the power and pleasures of transformation, sung by a man who took on every role in reach tonight — friend, lover, heathen, glitter boy, Irish poet — and was indisputably himself and in control in every one.”

“Courtney Love, a longtime champion of Friday’s music, took the stage to read her description of seeing the Virgin Prunes live for the first time. Characteristically unpredictable and unapologetic, the Grunge goddess praised the band’s “sex, snarl, and raw power.” “When I saw U2 they gave me inspiration… but when I saw the Virgin Prunes they FUCKED. ME. UP.””

“The night began appropriately enough with Friday, a gifted singer in his own right with the Virgin Prunes and several critically-acclaimed solo albums, crooning the beautiful ‘Apologia.'”

“The delicacy of that duet [ Antony/Gavin – Got What He Wanted ] was instantly obliterated by a jump out of your seats sensational announcement. The Virgin Prunes had reformed to sing “Caucasian Walk,” a sonic wall of rock power that vividly underlines why this band were and are so important to the genesis of U2. This lot rock out like no Irish band ever has or will. The well-heeled audience was astounded, and you could tell that suited this band just fine.”

“Some of the songs were powerful and some painful.That’s what happens when you invite everyone to the party. Some will make a mess, but there were some damn good voices and that so-called backup band sure knew their shit. Maria McKee and Friday gave a heart-rending version of “The Ballad of Immoral Earnings” from The Threepenny Opera. Martha Wainwright’s “You Made Me The Thief of Your Heart” was gorgeous. […] Bono took his cues from Friday, but both were in fine form as co-hosts.”