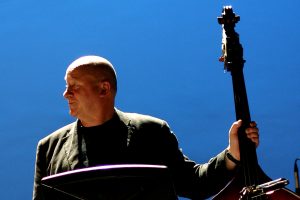 Gavin Bryars (1943) is an English composer and double bassist. Possibly his best known work is Jesus’ Blood Never Failed Me Yet (1971), especially the 90s version which features Tom Waits singing along with the original recording of the vagrant during the final section.

Gavin Bryars and Gavin Friday first worked together with the Crash Ensemble in 2005, performing Frederic Rzewski’s Coming Together and Bryars’ own Sinking of the Titanic at the O’Reilly Theatre in Dublin.

In 2007, Bryars, Friday and the Royal Shakespeare Company collaborated on the Shakespeare Sonnets Project, for which Gavin set Sonnet 40 to music, and Bryars composed Nothing like the Sun, featuring 8 sonnets for soprano, tenor, speaking voice and 8 instruments. Live, Gavin Friday took the part of the speaking voice.