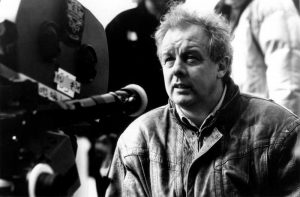 After leaving University College Dublin with a degree in English and Philosophy, Sheridan founded The Projects Arts Centre which became the focal point of alternative theatre in Ireland. Here Sheridan gave the Virgin Prunes some of their first gigs, including one on September 18, 1978 when they share the bill with U2, and the 24-hour-non-stop Dark Space festival in February ’79, which also featured The Mekons, Throbbing Gristle, Public Image Ltd and local bands among which The Atrix, Berlin, Rocky de Valera and D.C. Nein.

Sheridan emigrated to Canada, and later New York in 1981, where he became artistic director of the Irish Arts Center. Still in New York, he was approached by Dublin Theatre producer Noel Pearsan with the idea of “My Left Foot”, which he eventually directed. His next film was “The Field”, which earned its star, Richard Harris, an Oscar nomination.

Gavin and Jim kept in touch over the years. His response to the soundtracks of Sheridan’s two earlier films had been tepid, so when work on “In The Name Of The Father” started, Sheridan asked Gavin and Bono for advice. Gavin emerged as the more regular consultant.

The soundtrack of Jim Sheridan’s 1993 film “In The Name Of The Father” incorporates an original score by Trevor Jones as well as new songs by Gavin Friday, Maurice Seezer and Bono: the title track and first single “In The Name Of The Father“, “Billy Boola” and the second single “You Made Me The Thief Of Your Heart” featuring vocals by Sinead O’Connor. Gavin Friday also acted as music consultant for the movie.

Sheridan went on to direct “The Boxer” in 1997 and “In America” in 2003. Both films were scored by Gavin Friday and Maurice Seezer. Two years later Sheridan directed 50 Cent’s “Get Rich or Die Tryin’” for which Gavin and Maurice wrote incidental music in collaboration with Quincy Jones.