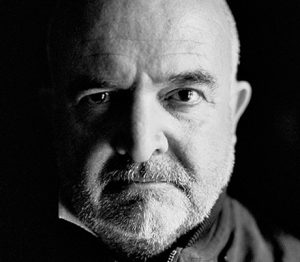 Peter Christopherson, a.k.a. Sleazy (27 February 1955 – 25 November 2010) was a musician, video director and designer. He was one of the original members of British band Throbbing Gristle who performed alongside the Virgin Prunes at the Project Arts Centre in 1978, and a former member of the influential British design agency Hipgnosis. At Hipgnosis he helped create albums covers for Pink Floyd, Genesis, Led Zeppelin, and Peter Gabriel.

With Geoffrey Rushton, aka Jhon Balance, Peter also took part in the formation of Psychic TV. Together, they formed the band Coil in 1982. Coil became one of the most influential and best known industrial bands, although their music crossed genres over the years.

In 1984, Coil’s first full length album “Scatology” featured lyrics and vocals by Gavin Friday on the track “Tenderness of Wolves”.

In ’92 Peter Christopherson and Gavin Friday were reunited when Peter directed video clips for “King of Trash” and “Falling Off The Edge Of The World” from the album “Adam ‘n’ Eve“.

On 13 November 2004, Jhon Balance died of injuries sustained in a fall. Christopherson moved from England to Bangkok, Thailand and started the project The Threshold HouseBoys Choir (based on the name of one of the labels Coil set up, Threshold House). He also released the final Coil CDs and re-issues, and took part in a Throbbing Gristle reunion.

Peter Christopherson died in his sleep on November 25, 2010.