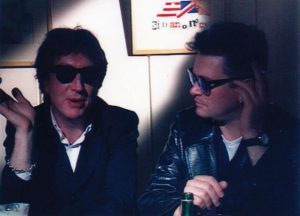 A regular at Gavin’s Blue Jaysus club, Simon co-produced Aidan Walsh’s LP “A Life Story Of My Life” with him in 1987. Walsh is an Irish character who owned a studio in Dublin’s Temple Bar and gained notoriety in the mid-80s.

That same year Gavin and Simon also recorded a cover version of the Rolling Stones “You Can’t Always Get What You Want” which was released as a single and a 12″.