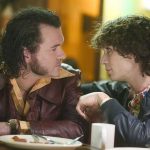 Actor Cillian Murphy (Cork, 1976) has worked with Gavin Friday on two films: Kirsten Sheridan’s “Disco Pigs” (1996) in which Gavin had a cameo as Paschal Stankard in a pub scene, and Neil Jordan’s “Breakfast on Pluto” (2005) in which Gavin played glam rock band leader Billy Hatchett.

Cillian on Gavin: “He was in Disco Pigs, actually, had a small part and I remember saying ‘God, this guy is fantastic’ and then Neil thought of casting him in that role and he just… eats it up, you know, he’s wonderful.”

Gavin also worked on the music of both films. He composed the score for Disco Pigs with Maurice Seezer and recorded two songs for Breakfast on Pluto, Sweet’s “Wig Wam Bam” and his duet with Cillian, a cover of Lee Hazlewood’s “Sand”.