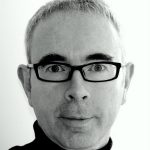 Richard “Dik” Evans was a founding member of the Virgin Prunes and guitarist with the band from 1977 until 1984. He later formed Kid Sisters with singer Debbie Skhow. After a line up change they continued as Screech Owls (’88 – ’96). The band released two singles: “Desert / Hey Toreador” and “Pray For Rain / 29 palm trees”. Dik, who is U2 guitarist The Edge’s older brother, was a member of The Hype, who – when Dik left – changed their name to U2.

Richard studied engineering and computer science and holds both a BAI (1980) and MsC (1981) from Trinity College, and a PhD (1996) in Neural Networks from Imperial College London.

As a solo artist, he contributed to composer Daniel Figgis’s Snakes and Ladders festival (2008).

Dik, Gavin Friday, Guggi (and backing vocalist J.G. Thirlwell) were reunited on stage at the “Gavin Friday and Friends” 50th birthday concert at Carnegie Hall (2009) to play the Virgin Prunes’ “Sweethomeunderwhiteclouds” and “Caucasian Walk”. He also joined the line up of the Gavin Friday band to play “Caucasian Walk” at concerts in Stradbally (Electric Picnic) and Dublin on the 2011 ‘catholic’ tour.