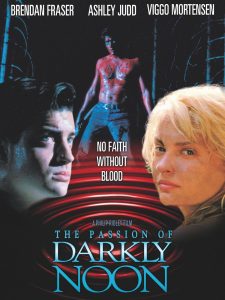 “Perhaps a bit of flashback explanation would help here. Some years ago, on my last film, The Passion of Darkly Noon, I needed a song for the scene where two characters dance. I went the usual route to find this: namely, chose a song already recorded, one that was known and had a fan base, in the hope that its presence would help the film, not only artistically, but also commercially. This is the song my actors danced to on set. Everyone agreed it worked like a dream. And then…my producers found out how much it would cost to use! The figure still gives me a sense of vertigo.

“So I suggested to Nick Bicat, who was writing the score for the film, that we should write our own song. He was very enthusiastic and, as a result, we wrote not one, but two: Look What You’ve Done (To My Skin), sung by Gavin Friday, and the film’s theme song, Who Will Love Me Now? (sung by P.J.Harvey). Not only did these songs prove to be one of the most popular aspects of the film, but it opened a whole new world for me in terms of how songs can enhance and comment on a film. I said to Nick, “The next time we do a film…we write all the songs.””