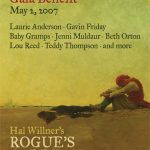 The world premiere of Hal Willner’s Rogue’s Gallery Live, a concert of selected pirate ballads, sea songs, & chanteys, is staged as the 2007’s gala benefit for Art at St Ann’s in New York. Proceeds went toward programming at St Ann’s.

The Rogue’s Gallery Live show is rooted in an album (“Rogue’s Gallery: Pirate Ballads, Sea Songs, and Chanteys“) born on the sets of the Pirates of the Caribbean films where producers Johnny Depp and Gore Verbinski were fascinated with the lore and fables of the pirates and sailors who ran the high seas.

Lou Reed sang “Leave Her Johnny” with Antony and “The Wild Goose Shanty” with Laurie Anderson. Bryan Ferry did “Lowlands Low” and “The Cruel Ship’s Captain”. “Barnacle Bill the Sailor” was performed by Antony, Kembra and Baby Gramps.

Gavin Friday sang “Baltimore Whores”. David Byrne (Talking Heads), who was in the audience on the night wrote in his diary: “He did a wild filthy Brechtian tune that was great”.