A Concert of Pirate Ballads, Sea Songs, and Chanteys 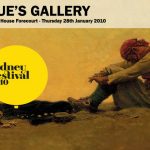 Hal Willner takes Rogue’s Gallery all the way down to Australia as part of the 2010 Sydney Festival.

Staged outdoors on the forecourt of the Sydney Opera House, the show and audience suffered under very wet conditions.

Irish Echo: “Dubliner Gavin Friday, for example, who had performed with the Gallery in London last year, was flawless in his delivery.”