Hal Willner – Shock and Awe: The Songs of Randy Newman 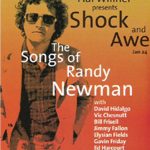 “Shock and Awe” was the second of two back-to-back performances featuring Randy Newman at Royce Hall in L.A. Newman himself performed songs from “The Randy Newman Songbook Vol. 1,” on January 23rd, followed by the Hal Willner produced tribute night “Shock and Awe”.

In the tradition of Willner’s Harry Smith Project, Willner put together an eclectic musical cast for his take on the Newman songbook. Willner and co-producer Janine Nichols reviewed almost 300 of Newman’s compositions and selected about 40 songs.

Stan Ridgway’s performed “Bad News from Home” and “Rider in the Rain,” Victoria Williams sang “Texas Girl at the Funeral of her Father” and “Davey the Fat Boy”, Los Lobos’ David Hidalgo’s sang “Sail Away” and “Going Home.”

Gavin Friday’s sang “Germany Before the War” and “You Can Leave Your Hat On”.

The L.A. Times wrote: “Gavin Friday, for instance, found a strain of defiant affirmation amid the sad self-delusion in the “I know what love is!” rant from “You Can Leave Your Hat On.””