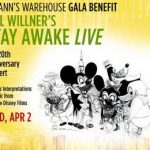 As it was a gala fundraider for St Ann’s Warehouse, the art centre where the event was held, tickets for this show cost $300 (table seating), $500 (preferred table seating), $1000 (best table seating). Says Gavin in an interview with Hot Press: “You know what’s so weird about the shows is that in their subconscious everybody knows these songs. And you love them because they’re from your childhood. In those days Disney was all about great songwriters. It was before they got people like Elton John to perform songs. The only thing that was weird was that because it was a benefit, and because it cost about ten grand a table, there were a lot of corporate types there who didn’t know what hit them.”

He remembers the gala as follows: “Suzanne Vega did a really sexy slow orchestral version of Cruella de Ville. Lou Reed did ‘Zippidy Doo Da’. Steve Buscemi sang ‘High Ho, High Ho It’s Off To Work We Go’. David Byrne did a version of ‘When You Wish Upon A Star’ and Eric Mingus, who’s Charlie Mingus’s son, said: ‘I’m going to do the most racist song ever written,’ and sang ‘Ooh Ooh Ooh I Wanna Be Like You.’ Garth Hudson and his wife Maud… now I don’t want to be heavy but she’s twenty-something stone and in a wheelchair. She couldn’t get on stage so she sang from the audience while people were coming in. They did a 25-minute version of ‘Feed The Birds’. I sang ‘Chim-Chiminey’, the Dick Van Dyke song from Mary Poppins and the ‘Siamese Cat song’ from Lady And The Tramp.” 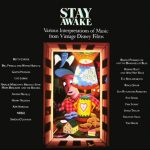 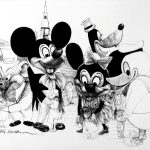