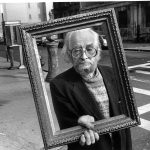 The third and last of the Harry Smith Project incarnations takes place with two star-studded shows in Los Angeles. Both nights the running time was over five hours.

The L.A. Times wrote: “Irish singer Gavin Friday offered a fascinating music-hall rendition of the eerie “Fatal Flower Garden,” which was recorded in 1930 by Nelstone’s Hawaiians, and an equally theatrical treatment of “When That Great Ship Went Down,” recorded in 1927 by William and Versey Smith.”

Entertainment Weekly wrote: “Another highlight was Irishman Gavin Friday’s rocking rendition of ”Fatal Flower Garden,” a 1929 tune about a boy who goes to retrieve his ball from a neighboring woman’s house and gets locked up and killed by the psycho lady. Let’s see Marshall Mathers write something that sick! (On Wednesday night, at the first of the two shows, Friday was cheered on by his Dublin pals Bono and the Edge, taking a night off amid their own series of L.A. concerts.)”