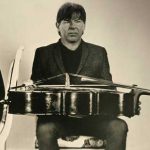 Cork musician Kevin Murphy is a member of Irish band Interference and his own cello based instrumental project with Thomas Haugh, Seti The First. Their debut album “Flower of There or Thereabouts” was released in 2011.

Kevin was a founding member of Dublin based band Igloo in the late 1990s and has also worked with Dave Gahan (Depeche Mode), Andrew Phillpott (Depeche Mode and The Broad Bean Band), Nine Wassies from Bainne, Adrian Crowley, Valerie Francis and Norah Belle among others.

He played cello and bass guitar in Gavin Friday’s band on the Shag Tobacco tours.