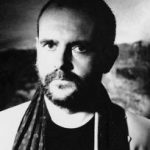 Gavin Friday and Pat McCabe met in the early Nineties when McCabe was living in London and Gavin was working on the “In The Name Of The Father” soundtrack and struck an immediate friendship:

“[Gavin and I] started to spend some time together – a lot of time, actually. That he liked disco music I was pleasantly surprised to hear – and his Behanesque combination of sensitivity and pugnaciousness was something to which I found I willingly responded…”

Shortly after, McCabe wrote the short story “Shagging Tobacco” as part of the sleeve notes of the album Shag Tobacco. Since then they have collaborated on and off stage many times – a selection of which is listed below: