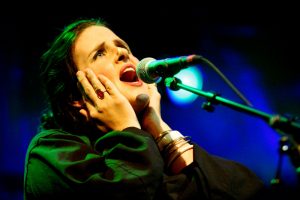 Maria McKee is an American singer and songwriter. She is best known for her work with Lone Justice and her 1990 UK solo chart-topping hit, “Show Me Heaven”.

In the 90s, Maria moved to Dublin where she befriended Gavin Friday. He guested during a live performance of hers in Dublin in ’88, performing Sweet Jane. She later returned the favour during one of Gavin’s early 90s USA tours, singing Esther and Ari Ofarim’s Cinderella Rockefella which they’ve since performed on various occasions, including shows in aid of the Dublin Aids Alliance. Another song they have performed multiple times is Kurt Weill’s Ballad of Immoral Earnings.

Maria McKee sings on Gavin’s song “Falling Off The Edge Of The World” on the Adam n Eve album.

In 2009, Maria performed alongside Gavin at his 50th birthday show at Carnegie Hall.

Listen to Gavin and Maria singing Ballad of Immoral Earnings on the Gerry Ryan unplugged show.