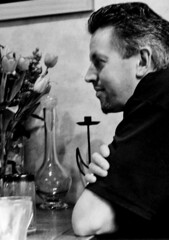 Maurice Seezer (born Maurice Roycroft, September 12, 1960 in Dublin) is an Irish musician who collaborated with Gavin Friday between 1987 and 2005. Together they worked on Gavin’s first three solo albums: “Each Man Kills The Thing He Loves”, “Adam n Eve” and “Shag Tobacco”.

A student at The Royal Academy of Music and Trinity College, he was a member of the college singers from 1982 to 1984 and became conductor of the Arklow Choral Festival in 1985. The same year he joined Flex and The Fairweather, fronted by Paul Tiernan, as keyboard player. Late ’86 he is introduced to Gavin Friday through a mutual friend and starts working with him in the Blue Jaysus club and eventually cements his musical partnership with Gavin when they start working on the demo tape of original material that leads to them signing with Island Records.

In 1993, he worked on Jim Sheridan’s In The Name of the Father soundtrack and co-wrote “You Made Me the Thief of Your Heart” along with Gavin Friday and Bono, which was performed by Sinéad O’Connor for the Academy Award-nominated film. Maurice has also collaborated with Gavin on the the original soundtracks of Disco Pigs, The Boxer, In America and Get Rich or Die Tryin’.

Maurice is Chairman of the Corona Fastnet Short Film Festival.

Read an interview with Maurice Seezer on CorkIndependent.com