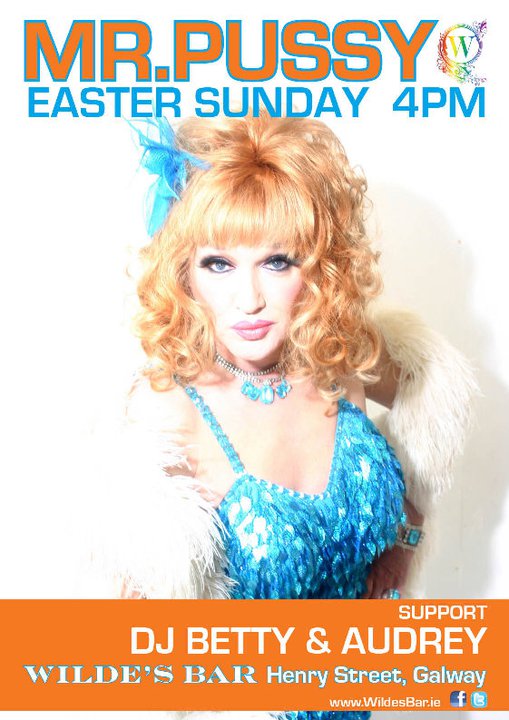 Born in South London, Amsby was a wig maker with Marlene Dietrich as one of his clients. He frequented the famous Vauxhall Tavern which featured drag shows and got into the act himself on a dare:

“A friend of mine teamed up with me and we made up an act, We did a couple of shows and pretty quickly we became very popular in London. We called ourselves Pussy and Bow and it seemed to work very well. One night, Judy Garland came to see us. She was with Johnnie Ray at the time.”

When the double act broke up, Alan fulfilled standing commitments in Belfast on his own under the name ‘Mr Pussy’, after which, in 1969, he travelled down to Dublin and decided to stay. He became a prominent feature in Irish cabaret.

Mr Pussy MC’ed at Gavin’s October 1992 wedding reception in the cellars of The Clarence Hotel (which were to become “The Kitchen” nightclub) and as Alan Amsby, he had a small part as a prisoner in Jim Sheridan‘s 1993 film “In The Name Of The Father“. Amsby had known Sheridan since his Project Arts Days and acted in of Sheridan’s musical “The Ha’Penny Place” which also starred Ciaran Hinds, Mannix Flynn and Agnes Bernelle.

All of this eventually led to the opening of “Mr Pussy’s Cafe De Luxe“, the Sheridan/Bono/Friday run cafe on Suffolk Street in Dublin where Mr Pussy was the host.

On the 1995-1996 Shag Tobacco tours, Gavin would adopt the Mr Pussy persona while performing the song, telling the story of how she met Mr Friday in Lillie’s Bordello (a Dublin nightclub) and asking him to immortalise her in song: “write a song, write a sad song, make it 25 years long”.

In Pat McCabe’s book “Breakfast on Pluto”, the character Patrick “Pussy” Braden is baded on Amsby. McCabe dedicated his book to Gavin Friday, who – when the book was eventually made into a film by director Neil Jordan – played the character of Billy Hatchett opposite Cillian Murphy as Patrick “Kitten” Braden.