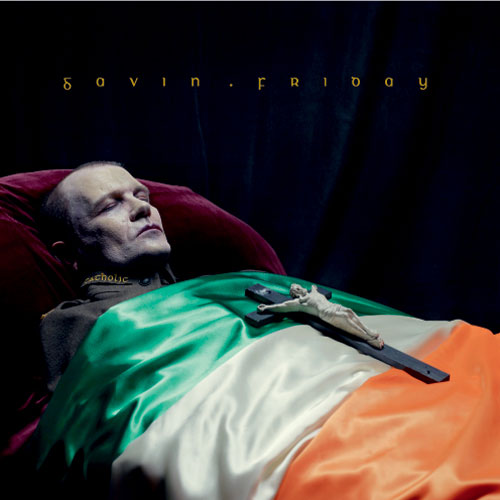 ‘catholic’ is the new album by the Irish singer and composer Gavin Friday.

“The night he fell in the Mouth of the Flowers… a dark medal of blood slowly forming near the general’s unmoving head. He was dressed in green. In his fading iris, the moon — and the future of the indefeasible Republic. The Angelus bell pealed and the sky flared as the British guns fired a salute in his honour.” Requiem for the Fallen, Pat McCabe

16 years since his last album Shag Tobacco, it’s time to salute anti-hero Gavin Friday, who returns fittingly, at a time of upheaval, of political chaos, and of spiritual, financial and moral bankruptcy. Ireland is a very different place to the country Shag Tobacco was recorded in, and the intervening decade and a half coincided with a prolific work period for the singer. From soundtracks for In America , The Boxer and Get Rich Die Tryin’ with Quincy Jones to collaborating on Nothing like the Sun with Gavin Bryars and the Royal Shakespeare Company, he moved away from the conventional parameters of the album. There was his acting debut (in Neil Jordan’s Breakfast on Pluto), Scott Walker collaborations and a Kurt Weill show at Dublin Theatre Festival. In personal terms, he endured illness, the end of his marriage and his father’s death. To some, the personal is political; but Gavin Friday is clear that this is “an emotional, not a political, album”. The singer likens catholic to “waking from a deep sleep, of letting go and coming to terms with loss”. And somewhere in the middle of all that, there are slivers of love, contentment and romance.

“Sometimes when you’re building songs, they tell you ‘look after me’ or ‘fuck off, and leave me alone’”

In opener Able, there is the kind of declaration that comes with age and experience, “I want you to love me… don’t want you to lie”. Friday turned 50 prior to recording catholic and the songs testify to a life lived, but one that’s far from over – physically or creatively. Lord I’m Coming might sound like an incantation to death, but is counter-acted by the titular positivity of It’s All Ahead of You. “Did you know that best is yet to come”, he asks rhetorically. The album oscillates musically and thematically between songs like Blame, dedicated to and about his father to Perfume, about our moments of promiscuity and lack of communication in The Only One.

Produced by Ken Thomas (Throbbing Gristle, Cocteau Twins, Sigur Ros), Thomas’ influence is most obvious on Cocteau-Twins shimmer of The Sun & The Moon and & The Stars. The album was birthed in a pool of 38 songs, which were whittled down. All songs were penned by Friday and his new musical partner Herbie Macken. Cocooned in Friday’s Killiney home, recording took just six weeks and involved musicians Gavin had worked with before: Multi instrumentalist Herbie Macken, Cellist Kate Ellis, Guitarist Jolyon Vaughan Thomas, Bassist Gareth Hughes, Guitarist Anto Drennan, Drummer André Antunes, and Moya Brennan [who guests on Lord I’m Coming ] and broadcaster John Kelly on harmonica. After spotting the Castleford Salvation Army outside a local shop, while mixing the album in Yorkshire Gavin invited them to contribute and Ken Thomas’ daughter Amy Odell also provides vocals on Land on the Moon. Everything builds toward Lord I’m Coming, an existential, orchestral psalm, an anti-pop composition of profundity.

In recent years, Gavin Friday’s output has been dominated by cinema, soundtrack and theatre, and its no surprise that their collective, lush shadow looms over catholic. Friday takes conventional song structures and scores them, adding Bowie-synths, sci-fi swirls, epic strings and Germanic rhythms.

Artist. Germanophile. Singer. Non-conformist. catholic. All are intrinsically Gavin Friday, but the latter is definitely spelt with a small ‘c’.

‘catholic’ is released on Rubyworks on Good Friday, 22nd April, 2011

Requiem for the Fallen by Patrick Mc Cabe, written and inspired by the words, music and world of ‘catholic’.