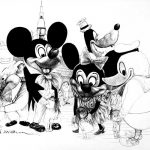 Forest Of No Return at the Royal Festival Hall in London, England was part of the 2007 Meltdown festival, curated by Jarvis Cocker and billed as follows:

Gavin performed “Siamese Cat Song” from “Lady and the Tramp” and “Castle In Spain” from “Babes in Toyland”.

Stuart Hardy wrote: “Gavin’s first number, the Siamese Cat Song (from Lady & The Tramp) came mid-way through the first half of the set. Musically this was an angular piece that emphasised the strangeness of the original, with the staccato, swooping strings suggesting the arched feline backs of its subject material. Superficially different to his recent performances of the past few years, there nevertheless seemed to be a continuity with some of the Tomorrow Belongs To Me material.

“Gavin’s second performance was the more straightforward Castle In Spain, also from Babes In Toyland: a gentle, vaguely Walker-esque song of cake and champagne. He gave it a Brechtian flavour and at times it was slightly reminiscent of his former wistful performances of Benares Song during the earlier phase of his solo career.”